Swat's descent into darkness: The tragedy of Mahmud's destruction of Uddiyana 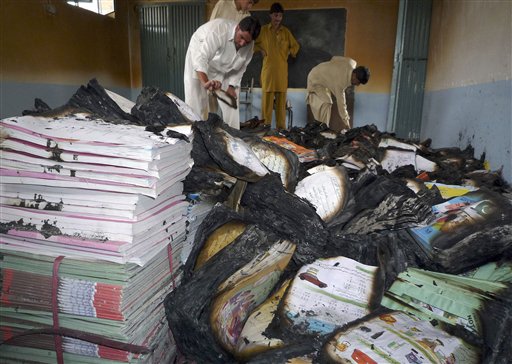 (A girl's school in Swat burnt down by the Taliban. Courtesy CBS. Mahmud of Ghazni forcibly converted Hindu-Buddhist Swat to Islam in 1000AD. He too burnt down schools and all the "Kufr" books he could find. Islam hates freedom of thought (maybe because it makes Islam look bad?))

Swat has been in the news lately. The Pakistan government has reached an agreement with the Pakistani Taliban which will impose Shari'a law on Swat. Girls' schools will be closed. Women will be placed in full body burkhas. It will be an Islamic district, where women will be beaten in public and reduced to the status of animals.

Civilizationally, Swat has reached the darkest abyss (read 7th century Arabia) from which it will be very hard to extricate it.

Yet how many know that in days long past, this area was known for its high culture - art, philosophy, and spirituality. As one of the western provinces of the Hindu-Buddhist civilization of India, it had reached a high level of culture that drew visitors from far away.

I had been thinking of doing a story on how Swat went from being a cradle of Hindu-Buddhist civilization to the depths of Islamic darkness. I was collecting sources, and found a source (the Dharma Fellowship ) that writes the story better than I could, so I am simply reproducing it below in a slightly shortened form. Read on..

A long time ago, in the far northwest corner of Old India, there once was a verdant and splendid Kingdom, inhabited by a gentle and cultured race of people. Surrounded by high, rugged mountain peaks, the broad valleys of this Kingdom fostered fertile farms and bustling towns. Frequently the traveler could see, nestled in quiet vales, here and there throughout the land, the golden pagoda roofs of whitewashed temples and monasteries, where learned sages treasured wondrous archives of hand scripted books recording mankind's accumulated knowledge. Here too could be found the pleasant sanctuaries of gracious ladies of wisdom, the convents and forest chapels of a unique sisterhood-priestesses, prophetesses (name them as you will, there does not appear to be a proper English term for a wise woman of religion who need not be a nun) dedicated to knowledge and the science of harmonious spiritual development.

Here and there, in ages long gone, industrious men had raised towering white cenotaphs, with golden spires; those pyramidal monuments known in the East as Stupas, which honour the remains of some particularly renowned saint. In the towns of this magical Kingdom, merchants plied their ceaseless trade, displaying all the riches of greater Asia: the finest coloured silks from far off China, the softest kashmere from Kinnaur, lustrous golden ware from the matriarchy of Suvarnadwipa, rubies and emeralds from southern India and Ceylon, gleaming white pearls from the legendary island of Bahrain, delicate copper work from the craft shops of the Himalaya, orange coloured saffron from nearby Kashmir, subtle spices from Indonesia, and finely wrought sandalwood carvings from Nepal. From Persia came inlay and fine jewelry and poetry. From Bactria they imported skilled doctors and medicine and lapis lazuli and Greek knowledge from yet further west. This was a wealthy land.

This was the ancient Kingdom of Uddiyana; so beautiful a Kingdom, that its very name means "the royal garden" (from the Skt: udyana). With cascading pure rivers splashing down from ice-bound lakes high in the snowy peaks beyond, and quiet pools stocked with fish, with lush meadows, in raiment of every variety of wildflower, Uddiyana truly seemed a paradise on earth. No wonder people from far and wide spoke of it as a magical place, the hidden flower garden of the wise and compassionate Lord Buddha.

We today are able to gain a fairly vivid picture of the ancient Kingdom of Uddiyana, because in the year 630 A.D., a renowned heroic Chinese Buddhist pilgrim, known by the name of Huen Tsiang, passed through the heart of Uddiyana on his way to India. Thankfully, he left behind him a brief but clear description of the now lost Kingdom's geography, culture and people. Huen Tsiang describes Uddiyana as a country bounded by snow capped peaks; a land of rugged mountains and broad valleys, of wide marshes, green meadows and high plateau, where grapes grow in abundance. He describes a land blessed by fine crops, by herds of well fattened cattle, and teeming with orchards of fruit-bearing trees—truly a nation of milk, bread, honey and wine.

Uddiyana is a land, said Huen Tsiang, that is rich in gold and iron and other profitable minerals. Throughout the year the temperature is never too hot nor too cold. It is thus, he said, a most agreeable land. The hillsides are covered in dense forests and the valleys are rich in flowers.

The people of Uddiyana, according to Huen Tsiang, were gentle, soft and effeminate. In our imagination he conjures a scene of healthy, tanned people, mostly clothed in pure white cotton. The men have white turbans, the women soft flowing saris, also white. These are a gentle, happy people, rarely endangered by war or calamity. They are a society appreciative of fine culture, and they are all, reported Huen Tsiang, great lovers of learning.

The usage of mantra recitation seems to have been Huen Tsiang's sole criticism of these people. And whether "addicted to reciting charms" or not, Huen Tsiang also perceived how devoutly "all the people greatly reverenced the profound teachings of the Buddha."

Where is the location of the magical lost Kingdom of Uddiyana today? It is to be found amongst the rugged mountains of northern Pakistan, and consists of the high valleys of Swat, Dir, Pangkora, Bunir, Bijawar, and Chitral. Indeed, the Swat Valley and these other districts still have a garden like quality. A vivid scattering of flowers are seen everywhere, and the great clear rivers still pour forth their bountiful waters, as in the past. Vast broad valleys, bounded as ever by their magnificent mountains, continue to support a happy and hospitable people.

Swat is the long valley in the mountainous territory north of Peshawar, through which the Swat River cascades southwards, descending from the Hindu Kush mountains of the north. The Greek conqueror Alexander the Great crossed the Swat River with his Army and did battle with the locals at Udegram, before making his way on into India. It was his successors who later merged Swat into the [Hindu-Buddhist]Mauryan Empire. Now the Swat Valley can be easily found on any map of Pakistan as a favoured stomping ground for ardent trekkers from Europe. And just as Huen Tsiang said thirteen hundred years ago, it is an idyllic land, never too hot nor too cold.

In a sense everything in Swat, Dir and Chitral has changed. The old glories of Uddiyana have gone. Even its remains have been largely erased by time and the careless destruction of man. In another sense nothing has changed. The people who once occupied these valleys are not so different than they were in the past. In fact the same race of northern Pakistani people who lived in Huen Tsiang's era, a people now known as Swatis, live there to this day, though they share their land with the dominant immigrant population of Yusufzai Pushtuns.

Unfortunately today, as a result of centuries of human occupation, the green forests described by Huen Tsiang are severely depleted. The landscape is browner than it once was. The people are poorer, the farmlands less fertile. This is largely due to the peculiar system of land tenure which came along with Islam, as a result of the Moslem Invasion when, now generations ago, the country was despoiled of its ancient treasures. Consequently the people, direct descendants though they may be of ancient Uddiyana, in Huen Tsiang's age, no longer enjoy their past bounties. With their glorious wealth, art and culture all gone, they must today scrape a less luxurious living from the ruined soil.

Before Huen Tsiang passed through the Kingdom of Uddiyana we know that the capital was a citadel up the neighbouring Indus River. However by the time Huen Tsiang arrived on the scene, he tells us that a new capital had been erected on the Swat River. This new capital was evidently where today stands the modern town of Mingora. In fact the very name "Mingora" can be traced directly back to the ancient site itself, which Huen Tsiang tells us was called Mangalakosha, the treasury of good blessings. Professor Foucher has found references to this capital city in a Nepali manuscript of the 9th century, which mentions that a Royal Temple dedicated to the Bodhisattva Vajrapani was located there.3


In ancient books we are also able to find mention of the long forgotten names of the various valleys or districts that once existed within the ancient Kingdom: names such as Hurmudzu, Rukma, Sikhadhara, Dhanakosa, etc. These various districts were apparently governed by vassal rajas or princes, under the overlordship of a single sovereign who is frequently referred to as great King Indrabhuti. This renowned king's name spans several generations, which tells us that more than one king of Uddiyana must have borne the same titular. We are also able to discover, by examining the Chinese Tang Annals, that one of these famous King Indrabhutis occupied the throne of Uddiyana in the year 642 A.D., just ten years after Huen Tsiang's visit.


The reason why the Kingdom of Uddiyana became a lost civilization is a sad one. In the 11th century the Moslem conqueror, Mahmud of Ghazni, raided up the Swat Valley and turned the beautiful garden of Uddiyana into a desolate wasteland. The whole culture of the Kingdom was destroyed for ever. The population was put to the sword, the children pressed into slavery, the women forced into the harems of the conqueror, the golden roofed Temples and all the ancient monasteries—all the old centers of learning—were sacked. The sisterhood of the ladies of wisdom disappeared, or dispersed. The scholarly monks were slain, the nuns raped, and every single book was thrown to the fire.

Thus vanished much of the lore of archaic ages: fragile paper texts and parchment scrolls penned in Sanskrit, archaic Kharosthi, Gandharan, Central Asian, old Greek, Bactrian, perhaps even Armenian scripts. Today nothing is left of the ancient glories other than nameless ruins. Swat, and Dir, and Chitral are now entirely Moslem territories. The people have forgotten their past.

After the terrible Mahmud, came the first Pashtuns, forcing the native Uddiyans (ancestors of the present Swatis) north and east. By the 15th century Yusufzai Pashtuns, driven in front of the Moghul invasion of Babur, poured into southern Swat, Dir and Mardan. With them came violent missionaries, forcing at the point of the sword any remaining unconverted Uddiyans to Islam.