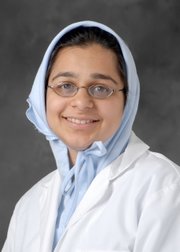 Female genital mutilation---a barbaric Islamic practice wherein the clitoris of a young girl is chopped off, so that she never feels any sexual pleasure ever in her life---has come to the US. This practice is common in Islamic societies from Pakistan to Somalia. In most developed countries, it is banned, since it is so horrific and takes away a pleasure that God has intended all humans to enjoy.

However, today, in a first, a Muslim woman "doctor" Jumana Nagarwala (photo attached, complete with Hijab) was caught performing this practice for fellow Muslims in Detroit, Michigan. Her victims were Muslim girls aged 6-12.

About 200 million girls and women around the world have suffered some form of FGM, the UN says, with half living in Egypt, Ethiopia and Indonesia.