Van Gogh, Taslima, and Wilders - Why Islam reacts the way it does

(This article is in honour of Taslima Nasreen - a fearless warrior for freedom. Taslima currently lives in hiding, in an undisclosed location in Europe, for daring to speak out about the plight of women in Islam, and the genocide of Hindus in Bangladesh. I salute you, Madam. )

Taslima Nasreen had, for years, been calling attention to Islam's treatment of women and Hindus in her native Bangladesh. Fear for her safety from Bangladeshi Islamists had forced her to move to India. The following sequence of events unfolded in India over the past two years, as Indian Islamists tried to throttle her intrepid voice calling for greater introspection in Islam:

In March 2007, the "All India Ittehad Millat Council" of Bareilly U.P. offered 500,000 rupees for her beheading. The group's president, Tauqir Raza Khan, said the only way the bounty would be lifted was if Nasreen "apologises, burns her books and leaves."

On August 9, 2007, Taslima was attacked at the Hyderabad Press Club in the state of Andhra Pradesh. Three elected members of the state legistlative assembly (MLAs) of the All India Majlis-e-Ittehadul Muslimeen (MIM) party were among the 100 male protesters who physically attacked her for her "criticism of Islam." Akbaruddin Owaisi, also an MLA and MIM floor leader in the state assembly, justified the attacks by saying, "We are Muslims first. And it's our responsibility to test those who have said anything against Islam in whichever way possible." Ahmad Pasha Quadri, one of the lawmakers, said: "Our protest is against Taslima Nasreen because of her writings ridiculing Islam."

Following this attack, Taslima was put under house arrest in West Bengal, from where she left for Delhi were the government kept her in safe custody in an undisclosed location. Following further protest, she was finally expelled from India on 15 October 2008. India, a country that is 82% Hindu, spinelessly buckled to Islamic pressure and expelled a fearless crusader for (non-existent) women's rights in Islam. 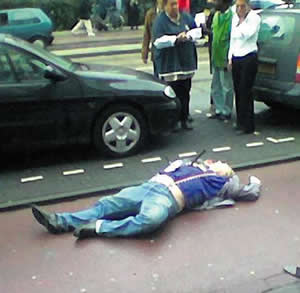 (Theo Van Gogh - murdered for criticizing Islam. He said to his Islamist murderer "You don't have to do this...We can talk ...")

Half a world away, in the Netherlands, Mohammed Bouyeri - a practising muslim - followed his religion's diktats and murdered Theo Van Gogh on the streets of Amsterdam on 2nd October 2004. Van Gogh's crime? He dared to criticize Islam's treatment of women in a 10 minute movie called Submission.

Once again in the Netherlands, showing spineless dhimmitude and bowing to the threats of Islam, the dutch government is threatening to put Geert Wilders in jail for his movie called Fitna, which examines the relationship between terror and verses in the Kuran which clearly exhort Muslims to commit acts of violence upon Kafirs.


In this post, I will show that Islam's stipulated punishment for criticizing Muhammad is death. I will inspect Islamic canon on punishments, and produce the relevant Hadith. The purpose of this post is to show readers that Theo Van Gogh's murderer was acting entirely in accordance with Islamic law when he stabbed Van Gogh. The repeated threats by Islamists to kill Taslima and Wilders is entirely in accordance with Islamic law on this issue. So let us examine Islamic law as it pertains to those who dare to speak out against Muhammad or his creed - Islam.

The Islamic canon on punishments is partly revealed in one of the 4 canonical Hadith (traditions of Muhammed) called Sunan Abu-Dawud. The Sunan Abu-Dawud has an entire chapter called "Punishments" which deals with this subject. Here are the two ahadith that are relevant to the case of some one criticizing Muhammad. In both cases, women are murdered for the mere act of abusing Muhammad.

Let ue understand the Hadith above. A man had a slave-mother (a slave who performs the role of a nanny). This lady disparaged Muhammad inspite of being warned not to by her Muslim owner. She was also pregnant. That did not stop the Muslim from stabbing her in her stomach, even as her baby came out from between her legs (presumably the baby died too). The next day Muhammad heard of this, and declared that the murder was alright - there would be no punishment for it.

The interpretation of this Hadith is straightforward, and consequently all schools of Islam agree that this means that people who disparage Muhammad deserve to be killed.

Here is the very next Hadith which reinforces this. Another woman is murdered for abusing Muhammad.

Once again, Muhammad declares that there will be no punishment for this murder.

There are other Hadith where Muhammad explicitly orders his followers to murder women who have been abusing him (and nothing more - their fault is only that they do not take his claims to being a Prophet seriously, and disparage him). In the Sira (the biography of Muhammad), there is a scene where a Meccan who had expressed doubts about Muhammad's claims to Prophethood is brought in front of him. A sword is put to his neck, and Muhammad asks him "Do you still doubt that I am the apostle of Allah?" The Meccan, sensing that his head is about to be chopped off, emphatically says "No, I do not"! This is how Islam spread.

Now, all of this is obviously very disturbing. How can a man who behaves this way, especially towards women, be considered a Prophet by 1.2 billion people. One reason is that a vast majority of these 1.2 billion have never read the Hadith. Till relatively late, translations of the Hadith were inaccessible to most muslims. Non-arab muslims, even devout ones who had memorized the Kuran, often did not know its meaning. Thus they lived in a world of delusion - one where their Prophet was a very "kind man" who "loved even those who abused him." But the Hadith mention no such thing. They portray a man who was extremely intolerant and violent towards anyone who so much as doubted his claims to prophethood.

These ahadith form the basis of Islamic laws such as the Tauheen-e-Rasool ("Insulting the Prophet") law of Pakistan which gives the death penalty to anyone who is found disparaging Muhammad. It is a convenient law - if you want the property, or wish to get even with one of the minority Hindus or Christians, simply say "He was insulting the Prophet." Then it is the muslim's word against the Hindu or Christian's. But here is the clincher - Islam gives only half the weight to the testimony of a Hindu or Christian as it does to that of a muslim. Muslim wins, Hindu or Christian hangs (or more likely, is lynched by an angry muslim mob just returning from a hateful sermon at the Friday prayers). End of Story. Islam wins, as always, through violence.

It is up to the free world to stand up to Islam's bullying. We have had enough. I repeat, we have had enough. We reject the double standards Islam imposes on us. The world demands that Islam be subjected to the same scrutiny that all other ideologies before it have. It can no longer escape this scrutiny by brandishing its blood soaked sword.

I end by expressing my support for a man who needs, and deserves, our support. On behalf of the Hindus of India,